A microbrewery, coffee roasting, naturopath and artisan crafts. In partnership with G Adventures we find a slice of “urban” life in the mountains of Uganda. 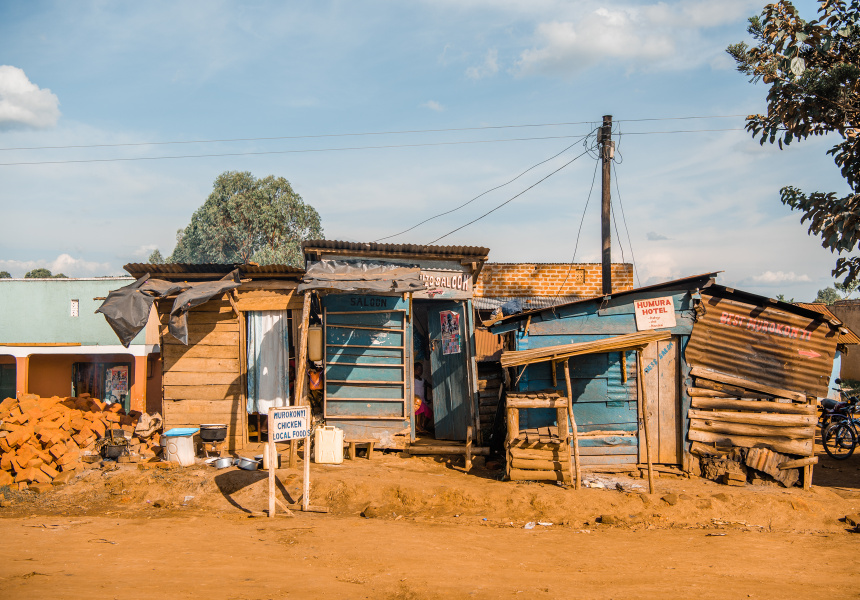 It’s the tail end of the wet season in Western Uganda. The smell of warm rain rises from dusty streets of Bigodi Village and mingles with the sticky scent of tropical fruit. Our G Adventures tour van has just pulled into the mountain town, and some of our small group are wondering why. But Jamil, our driver and CEO (Chief Experience Officer) is smiling. I think he knows something we don’t.

We’re in the Kamwenge district, 1200 metres above sea level and a stone’s throw from Kibale National Park. The village is home to people from the Butooro and Bakinga tribes who mostly live a subsistence life, farming and growing their own food. Houses are made from mud and wattle, the plusher ones coated in a render of ash and cow dung. Butchered cows hang on hooks on the main street. Barefoot children pump water from the town bore to fill jerry cans. Motorbikes carrying whole families weave through crowded, pot-holed roads.

On the hazy horizon we can just make out ribbons of snow snaking down the cloud-piercing Rwenzori Mountains, or “Mountains to the Moon”, that mark the border with the Democratic Republic of Congo. The circular hut we’ve been ushered into, with its dirt floor, thatched roof and mud walls, provides welcome respite from sub-Saharan sun.

Bigodi might be an ordinary village, but for our tour group this is no ordinary day. We’re getting a rare behind-the-scenes look at daily life in a typical rural community. More importantly, we’re learning how the people of Bigodi are harvesting the fruits of ecotourism to supplement the banana, pineapple, mango, passionfruit and sweet potato that grow so bountifully in the fertile soil of these lush green hills.

Naturopathy, but not as we know it
I’ve never been to medical school but I can’t imagine it being as much fun as this. Three skulls – a monkey, a dog and a fox – bare their teeth at us on a mat. Surrounding the skulls are plants, twigs, berries, seeds and the coloured juices of traditional medicine distilled into traditional Powerade bottles. Seventy-year-old Wilson, Bigodi’s respected medicine man, sits with resolute authority, a black pipe teetering from the corner of his mouth. His 19-year-old son and heir-apparent, Adruf, perches beside his father, dressed in a bedraggled robe made of bark cloth (the fibrous outer layer of a fig tree).

Adruf explains the animal skulls will be burnt and the ash applied to heal the wounds of unlucky villagers bitten by animals with the corresponding skull. The only wild animals that have attacked me so far on this trip have been little bastard ants, but Adruf doesn’t appear to have any ant skulls handy. So he instead teaches us a few other useful remedies.

Have a troublesome foe you wish would just disappear? Simply take one piece of chimpanzee skull and a stick from its nest and bury them at the door of your nemesis while they sleep. When they wake up and step over the items they’re sure to leave town for good that day. The secret recipe for natural Viagra is revealed (both male and female tonics are available). We also learn how new remedies are developed and then stringently peer-reviewed by medicine men in nearby towns.

Our crash course is part of an eye-opening cultural tour through the village, part of an initiative that achieves the often-conflicting objectives of wildlife conservation and sustainable community development.

Location is everything. Bigodi lies in a biodiversity hotspot, nestled just above the globally significant Bigodi Wetlands Sanctuary. For the townsfolk it’s a double-edged sword. The dense, eight-kilometre-long papyrus swamp provides habitat for more than 200 bird species, including the rare great blue turaco and grey crowned crane, plus eight primates species. It functions as a vital wildlife corridor. But the wetlands are threatened by the encroachment of crop-plantings and land clearing.

A solution to achieving a balance between conservation and community development came in 1992 with the formation of the Kibale Association for Rural and Environmental Development (KAFRED). Working alongside the local farming community KAFRED established protected zones in the wetlands, offsetting the removal of agricultural land by creating guided tours of the wetlands and surrounding villages.

The money raised from these tours is funnelled straight back into the community and has given the town its first ever high school. It’s also funded a women’s group that produces artisan crafts. The KAFRED project has twice been awarded the Equator Prize, a United Nations Development Program award that recognises outstanding community efforts to reduce poverty through conservation and sustainable management of biodiversity.

Even so, I didn’t really expect to find a microbrewery here.

Banana brews
From Wilson’s hut we move to Alex’s backyard. Alex uses traditional methods to brew banana beer, which makes him a bit of a hit in town. He says villagers will often turn up to his door on Saturday nights chanting expectedly, “Alex, Alex, you good man!”

Banana trees sprout seemingly at will from the soil here. But Alex’s granary, where the bananas are ripened by fire, required a bit more grunt to build. From the granary Alex brings the bananas to a hollow in the ground lined with banana leaves, then squeezes them between clumps of speargrass to produce a juice. Sorghum powder is added for fermentation, tea leaves for colour and it’s bottoms up. We drink to that, clink glasses and declare that Alex is indeed a very good man.

No need for a KeepCup
A short walk up the hill leads to a small mud shelter, where 17-year-old Harriet is running what must be the world’s most unlikely single-origin coffee roasting factory and cafe. Harriet’s plantation of coffee trees is bulging with ripe Robusta beans. Like a bunch of German tourists in Mildura picking oranges for their second-year visa, we amble over to strip the trees, filling our buckets with beans.

Harriet’s smart enough not to trust us with the technique needed to expel the husk from the ground beans, though. She tosses the tray of pummelled beans like she’s flipping a pizza, gently blowing across the debris to remove the husks.

Our young Bigodi barista lights a fire and the roasting begins. Smoke rises and the familiar smell of coffee fills the hut. The brew is made with boiling water and coffee in a saucepan on the fire. (Campers who forgot to pack the percolator will recognise this technique as “bush coffee”).

True artisanal crafts
Last stop on the tour is a visit to three women weaving intricate baskets from papyrus grass. Margaret, Annette and Fortunate boil coloured seeds to create a permanent dye, then weave the patterns tightly to create the fine, cylindrical baskets known as endiiro. Each basket is individual and all are undeniably beautiful. The products from this women’s group will stock the village craft shop, which also carries traditional handmade instruments, bread baskets, bark cloth, wallets, hardwood carvings, clothing and ornaments.

For the people of Bigodi the tours and craft sales provide a much-needed boost, compensating the community for the loss of cropping land in the swamp. For us it’s an unforgettable immersion in the daily life of a vibrant and resourceful Ugandan village.

This article is produced by Broadsheet in partnership with G Adventures.