A Camel-Back Adventure Through the Sahara

Across mountainous sand dunes and into an isolated campsite for a decadent feast under the stars. In partnership with G Adventures, we travel to the heart of the Moroccan desert. 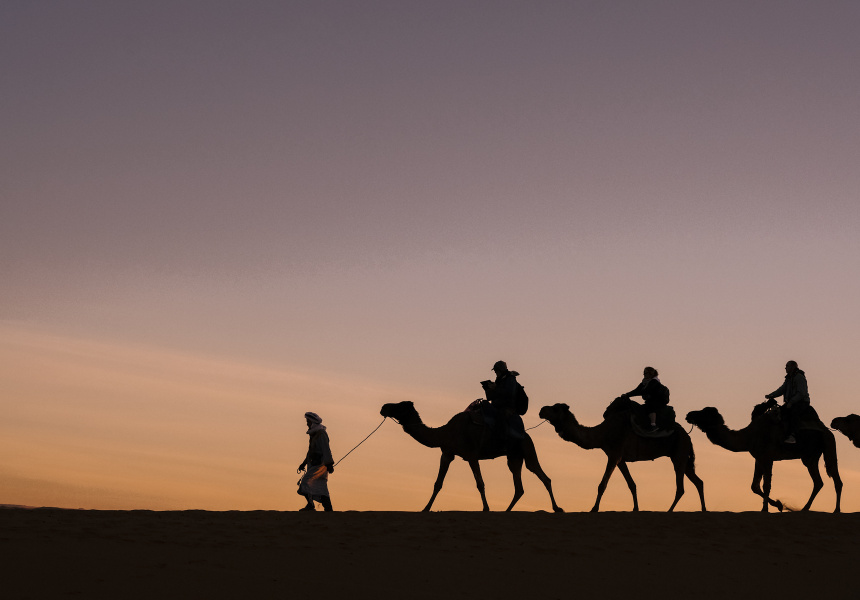 You never expect it.

Lahcen Taallate, our G Adventures guide (or ‘Chief Experience Officer’), had told us we were staying in the desert that night – first a camel ride, then a meal and a sleep in a secluded campsite. Everyone was excited, but while he was saying this, we were already in the desert and it was far from exciting. Out both windows all I could see was a barren plain of rocks, sand and the occasional shrub. Brown-grey, flat and as unremarkable as it is inhospitable.

Then someone in the group shouts out to look in front. There, in the horizon, is a honeycomb-coloured mountain range barely visible through the sun ahead of us. Our bus glides closer and we gradually see these are not mountains of rock but sand. Enormous sand dunes, beautifully undulating into the distance appear as smooth and unblemished as a fresh coat of snow.

I look out the window to each side – the landscape is unchanged. It’s that same brown-grey rocky desert everywhere right up until the dunes themselves. There is no introduction to the dunes, no increase in sand or height. It is flat and rocky here and all of sudden grand, sandy and mountainous there. They appear, suddenly and unexpectedly. It’s like sailing an open ocean and finding an unmapped lush atoll standing alone in the middle of the blue.

Our approach by bus can only last so long. Steep sand dunes don’t provide the natural environment for a wheel. We stop at a nearby hotel, lavish in design and scale, and swap our bus and daytrip gear for anything you might need in a desert. One by one, my 12 friends appear from the changerooms not with hats, sunnies nor glistening thick layers of sun protection, but scarves dexterously tied around their heads like desert explorers.

Who cares if there’s less wind than inside a nuclear bunker, no one wants to be the only traveller on a desert camel trek without thematically appropriate headgear. So, I grabbed my scarf and whipped it around my head the only way I knew how, messily.

On the other side of hotel, we see our first up-close impression of the dunes: our ragtag team of camels and our two local guides, both Amazigh desert natives. Taallate has lost his leather jacket and donned a traditional Moroccan djellaba – a long, loose-fitting hooded robe that, if you added sagging sleeves would be remarkably wizard-esque.

He looks fixated on my head. “What is that?” he asks, accusingly.

He laughs and yanks the scarf of my head. Of course, it falls easily because it has no structural integrity. He ties the end, places the knot on the back of my head and whips the remainder around my forehead, leaving the last bit of cloth to loosely hang around my chin. He lifts the loose end over my mouth and nose as a sand protector and drops it again to show me how it’s done.

Taallate knows about scarf-tying techniques and seemingly everything about this patch of the world because he’s an Amazigh, too. He grew up in the nearby Atlas Mountains (you’ll drive through those, it’s a woozy but astoundingly photogenic ride) and he’s been doing tours like this for the past 14 years. If you need your scarf tied, have a question about Moroccan political history or you want to know where to try a nip of camel milk, he’s your man.

The one thing he doesn’t profess to be skilled at is leading a caravan of camels. He jumps in a jeep and leaves Hamid, a softly-spoken camel herder to guide us up onto our camels and across the dunes.

Now, camels. Have you ever met one? Properly met, close enough to touch, smell and hear one? They may not seem particularly noteworthy in photographs but up close they’re one of the most comedic animals on earth, right up there with emus, penguins and sloths. Their eyes bulge but only occasionally, they speak in a dialect of prepubescent grunts and multitoned belches, and their faces are comically structured to look like elderly, inbred giraffes in need of major dental surgery.

That’s not to say riding them up and down the Moroccan Sahara is unpleasant – it’s quite the opposite. Aside from the occasional comedic belch, piss or emotionally ambiguous grunt, the journey is most relaxing.

Once you get the hang of the rhythm of their gait (don’t cling onto the handle bars for dear life, find your confidence and lean back a little, it’s much easier on your posterior), all you need to do is admire the scenery, which is equally grand.

Morocco has proper sand dunes. Real sand mountains, so high that an attempt to conquer a particularly tall one will melt your calves and drain you of sweat. Most are completely unblemished by shrub, rock, camel print or any sign of activity. The only life that exists is hinted at by the scattering of fennec fox, jerboa (like a tiny kangaroo-mouse) and desert hedgehog tracks. Depending how the sun sits, the dunes can be anywhere between a pale caramel and the kind of vibrant but dusty red I thought was exclusive to Outback Australia.

While you’re wandering through this spectacular and alien landscape, you’ll no doubt wonder, “Where on earth am I going to sleep?” You’ll find your answer about an hour into the ride. A cute campground will appear beyond a sea of small dunes. There is an alley of rugs in the centre, with cabins to either side and, at the far end, a large square with rugs underneath besides for where a fire pit lies in the centre. But that’s all for later.

First you have to scale that sand dune next door. Yep, that massive one. Forget about your calves, at the top of that sand mountain comes a spectacular sunset you may never see again in your life. Imagine all the colours between yellow and red split and laid out across a fierce ocean that has been frozen in time. Each uneven wave propped up permanently but without a break in it. Beyond the dunes, on one side is a gorge and the desert of Algeria, and to the other side the rocky plain you’ve just crossed. You can see it all, and once it’s faded all you’ll see is the purest night sky possible.

Back at camp a feast and performance are waiting. First we devour olives, an onion-y lamb tagine, bread and mandarins, and then witness an impromptu drumming circle and song from the Amazigh people, who guided us here. Most of us dance, but some just stargaze and listen. The night winds down with traditional stories and riddles from Taallate and another guide. We are all plump with wonder and giddy at the day’s memories. Exhausted, I head to my cabin thinking never, at any point in my life, would I have expected to be in this moment.