At the foot of snow-topped peaks in an isolated Peruvian town, a social enterprise is serving up mouth-watering traditional fare. In partnership with G Adventures, we develop a taste for an ancient culture. 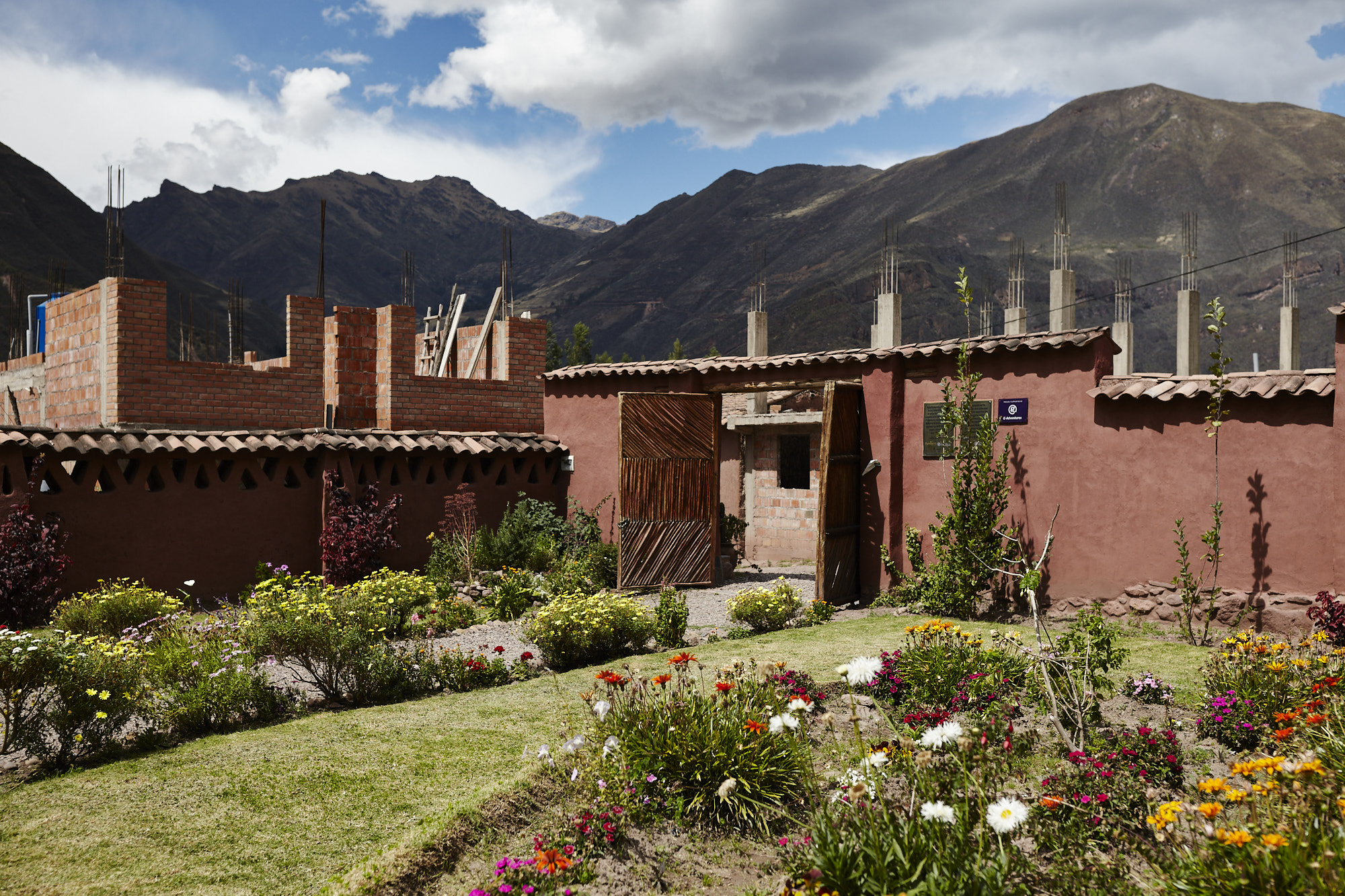 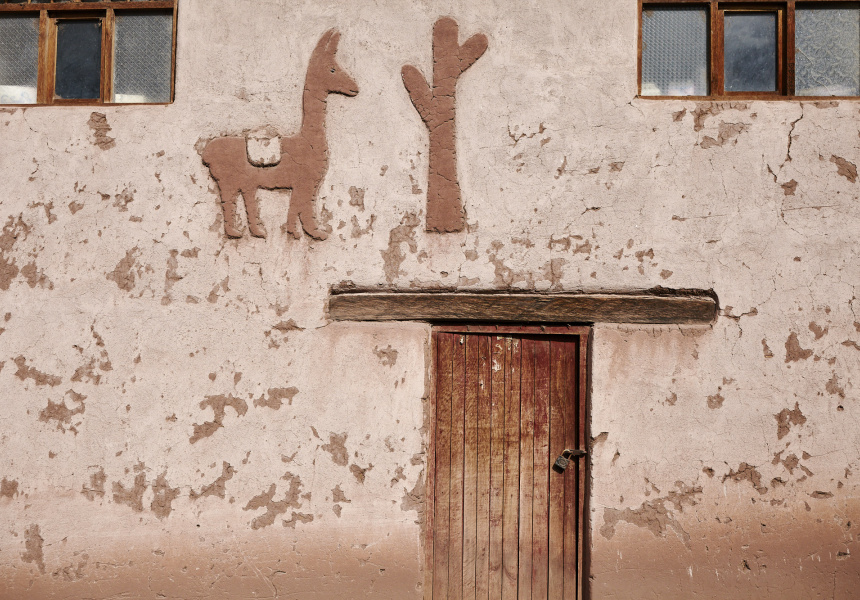 We’ve been curving up and down the dramatic mountain ranges of Peru’s Sacred Valley in a mini-van for the better part of the day, inspecting traditional local crafts and ogling the wonders of ancient Incan architecture. Our mid-morning snack of woodfired empanadas in the town of Pisac seems like yesterday, but our ‘Chief Experience Officer’ (G Adventures tour guide) promises today’s lunch is nearing. The group rejoices as our driver pulls onto a thin dirt road and cuts the engine. But we’re seemingly in the middle of nowhere.

Huchuy Qosco is a tiny town of dusty pink mudbrick walls and matching clay underfoot. It seems to stretch for only a few streets before the flat terrain rises abruptly skyward to be replaced by snow-topped peaks. As we clamour out, our modern vehicle feels tremendously out of place in this small community that sits some 2,920 metres above sea level. Chickens roam the streets and emblems of Incan warriors adorn building walls. But it’s in this remote village that a farm-to-table restaurant is plating up traditional Peruvian dishes to 16,000 travellers each year.

Huchuy Qosqo means “Little Cusco” in the local Quechua language. A 50-kilometre steep and winding drive from its bustling cosmopolitan counterpart, Cusco, the small village of 70 families has historically struggled to survive, with little access to economic opportunities, clean water and basic services. But in 2013, travel group G Adventures and its non-profit partner Planeterra Foundation, changed that. With co-financing from the Multilateral Investment Fund of the Inter-American Development Bank Group, Planeterra kickstarted the Parwa Community Restaurant – a sustainable tourism project that aims to help assist and sustain the community.

In the restaurant locals receive training in kitchen and front-of-house roles, as well as skills in administration, taxation, accounting and management. The community helped to build the premises, and when Parwa opened in March 2014, ingredients were sourced from the village’s farmers – helping to strengthen the local economy with reliable and direct sales. In late 2015, the community created an onsite organic market garden to help supply the restaurant and show diners how the food is grown.

Our meal starts with panecillos (small bread rolls) served with butter laced with huacatay or Peruvian black mint – a herb native to the Andes. Next, a causita or mini causa is delicately placed on our plates. In Quechua tradition, causa was historically a simple “sustenance of life” stack of papa (potato) and ají (black olives). But the dish has evolved over centuries to arrive at the decadent Limeña (Lima) version, which layers seasoned mashed potato, mayonnaise-slathered chicken, avocado and occasionally even ceviche into a tidy tower. Our sample of this ancient food is the Quechua iteration, topped with a potato crisp to make the most of the Andes’s 3500 varieties of potatoes.

My first-ever tamal cusqueño is an utter delight. The word tamal derives from the Aztec’s tamalli meaning “enveloped”. Locally, this delicious steamed corn cake (encased in a corn husk) is called humita and has been prepared since the pre-Colombian era – which is possibly why the tour leader seemed puzzled by my amateur enjoyment of this ancient staple. Tamal is to Quechua peoples, what pasta is to Italians.

Our feast continues with papitas a la mantequilla (small crispy potatoes) and rocoto relleno (a local dish of stuffed peppers) accompanying chaufa de quinoa. Chaufa derives from the word chaufan, meaning “fried rice”. This dish arose from the influx of Chinese immigrants from 1840, with rice eventually replaced by locally grown quinoa to make the most of this grain’s “superfood” qualities. Peru evidently does vegetable diversity well, with the Andean region cultivating more than 3000 varieties of quinoa – a few of which are served as a medley with wok-tossed vegetables for our chaufa de quinoa.

Despite the emphasis on sharing local cuisine based on ingredients grown in the area, the kitchen here graciously accommodates all manner of dietary needs including gluten-free, dairy-free, vegetarian and vegan. The front-of-house staff are dressed in traditional garb, creating a flurry of colour as they move swiftly between the kitchen and the dining hall and back again. They are friendly and kind, laughing with us at our attempts to pronounce sulpayki (thank you so much) and tupananchiskama (see you soon).

The Parwa Restaurant project has been a particular force in empowering women of the Huchuy Qosqo community. Through training and employment here, they contribute to the family income and play a leading role in the development of the wider community. The restaurant staff receive health insurance, pension funds and capacity-building training. As the restaurant is owned by the Huchuy Qosqo community, profits are invested back into local development projects across health, education and nutrition. This support has helped the community develop a water project to provide more safe drinking water to families and aid with irrigation in times of drought. They also purchased six computers and internet access to establish a computer room where children can do their homework.

Each traveller (15,000 people on multiple itineraries) who dines at Parwa Restaurant, part of the G Adventures “Amazon to the Andes” tour, is helping to preserve the food, language and culture of the local Quechua peoples. We’ll drink (a pisco sour) to that.

This article was produced by Broadsheet in partnership with G Adventures.