Our visit to the home of two authors is an insight into a novel partnership. 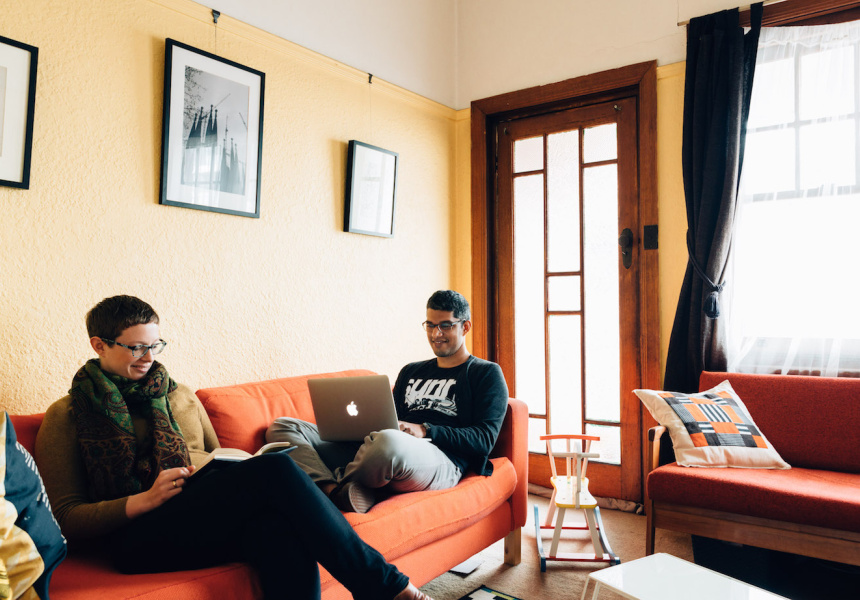 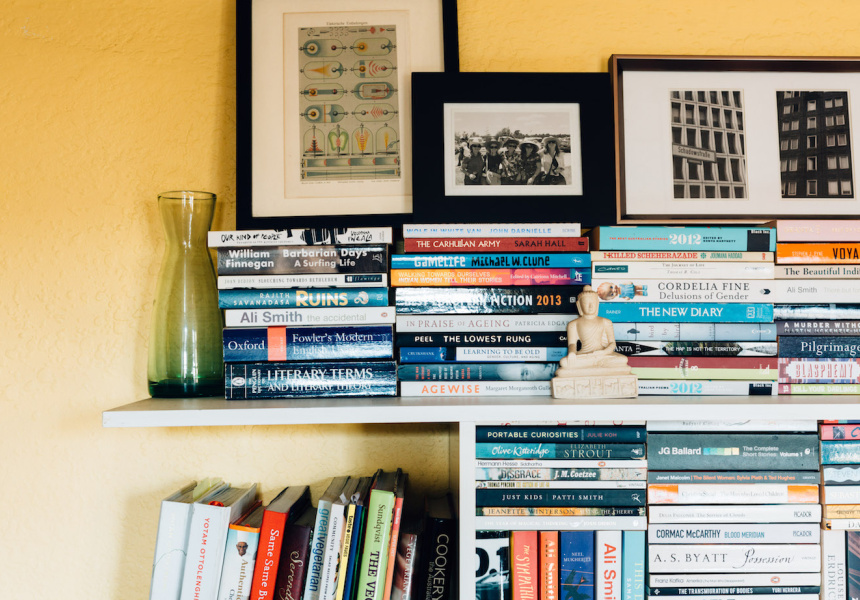 There is a romanticised view of the Novel Writer – solitary, locked away in a book-filled den, tapping away on a typewriter. But sitting in the cheerful living room of Melanie Joosten and Rajith Savanadasa’s Art Deco apartment, overlooking a busy Brunswick street, it’s clear that stereotype doesn’t apply here.

In the last year, Joosten and Savanadasa have each released a book. Savanadasa’s debut novel, Ruins, was published in mid-2016, and he’s already deep into work on his next project. 2017’s Gravity Well is Joosten’s second novel and third title – she also released a collection of essays in 2016, and her acclaimed debut novel, Berlin Syndrome has been made into a film directed by Cate Shortland.

Joosten and Savanadasa, now married, have been together for six years. They met at a pub. They were there for a date – just not theirs.

They’ve lived in this apartment for five years. Joosten was looking to move out of her sharehouse and Savanadasa “tagged along” for the inspection. “I was going to move in with a friend,” she explains “and he was like ‘ahhhh … maybe I could live here’. That was pretty much how it happened.”

There’s a well-used desk tucked to one side, books neatly arranged, and, just visible in the next room, a high chair – evidence of their two-year-old daughter, Mala. We meet early in the morning because despite the pair’s readily apparent accomplishments in literature, writing isn’t a full-time occupation for them – both have a day job. Balancing parenthood, work and writing means time to do this interview is a luxury.

With writing being such a competitive industry, I ask if it’s a concern that a couple in the same field might find themselves competing for the same opportunities. “Our work is quite different so there isn’t much to compete over,” says Savanadasa.

“The only thing we compete for is time, now that we’ve got a two-year-old,” Joosten explains. “We used to have all the time in the world.”

“You only realise that after you’ve had a child – that you had all this time and you just wasted it,” adds Savanadasa, smiling.

There are also benefits to living with another writer – close proximity to an editor. While they emphasise that they don’t read each other’s work on a regular basis – rather, only when there’s a reasonably big issue to work through – their familiarity allows them to push one another further due to the honestly and openness of their feedback. When Savanadasa was drafting Ruins he asked Joosten for her opinion.

“I wrote two drafts of it and I got told it wasn’t quite working,” he says, laughing. “It was a really hard one because it was a difficult thing to fix – I had to put it away and go back to square one.”

“And I wouldn’t have said it but I’d read some of his work before so I knew he could do better writing than that,” Joosten explains, before turning to Savandasa to say: “I hadn’t read much at that point, but I knew what you’d written had more life in it than that manuscript. I was just like, ‘this isn’t as good as it could be’.”

After releasing two books in relatively short succession, Joosten is now taking a break and focusing on shorter terms projects – she’s able to read for leisure now, instead of work. Savanadasa, meanwhile, is working on his second novel – though in shorter bursts than he is used to. They mostly work when their daughter is sleeping.

As writers, they are almost as different as two people can be. Savanadasa works chronologically, while Joosten breaks things into scenes. Joosten prefers to work at a desk, while Savanadasa generally works on the couch. They progress through ideas at different rates. They problem-solve from different angles.

But the process itself is a minor detail – on the bigger-picture realities of writing, they’re on the same page: they understand, intimately, what the other is going through at each step of what can be an emotionally gruelling process.

“You put all this work in and then it might come out and no one takes any notice of it whatsoever,” Joosten says.

“You understand the pressures more,” adds Savanadasa. “[How] you feel the need to be out there and pushing your book and working on the next one.” Part of that pressure is financial.

“It might be easier if one of us wasn’t a writer because then you’d have someone who could just work and earn lots of money and the other could spend all their time writing,” says Joosten, making them both laugh.

When asked whether they hope their daughter follows in their footsteps, they both smile. “We are really hoping she doesn’t go into the creative fields,” says Joosten. “Maybe stockbroking … That would be much more useful to us. She’s our retirement plan.”