Home » Wanderlust » In Love, in Greece, in the Springtime

In Love, in Greece, in the Springtime 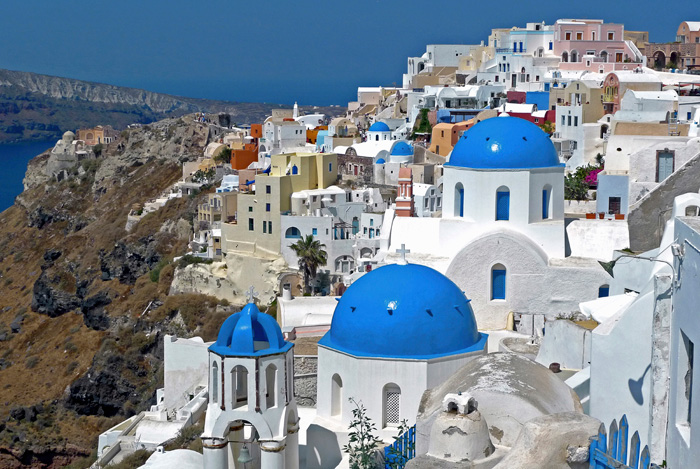 Note: In honor of Valentine’s Day, we are pleased to present this essay by Wanderlust editor Don George about a youthful, and abiding, romance in Greece. The piece is excerpted from his recently published collection of stories and essays, The Way of Wanderlust: The Best Travel Writing of Don George. Wherever you may be, we wish you a romantic celebration this weekend—and throughout the year!

It happens at some point every spring: I will be driving innocently along some rural route, and suddenly a certain slant of sunlight will recall the way the light filtered through the pine trees along the road that wound up the coast from Athens to the little taverna no one seemed to know about—no one except Gisela, the beautiful and mysterious woman with whom I had fallen ineluctably in love with that spring of 1976.

We would install ourselves in peeling white wooden chairs around a solid wooden table on the beach, under the pines, and the kindly taverna owner would bring us huge chunks of hard, delicious bread, a salad of feta cheese, tomatoes, cucumbers, and black olives, and glasses of retsina.

We would eat and sip, but mostly we would watch the shimmering sea and listen to the sighing pines, censing the air with their tangy perfume.

I re-create this scene, and suddenly that whole mind-opening, life-transforming Grecian year revives in a sun-flooded succession of images:

I recall the breath-stopping, time-skipping beauty of just-blossomed scarlet poppies against white marble ruins at Olympia.

I recall the Peloponnese mountain family who insisted on sharing their meager Easter feast with my parents and me.

I recall the ethereal geometry and bony patina of the Acropolis at dawn, before the tourists arrived, and the soul-stirring rite of reading Plato, Socrates, and Aristotle as Apollo’s first rays illumined the site.

I recall unfathomable connections on the island of Crete—the magical frescoes and sere splendors of Knossos, and the painter from Chania who showed me the island’s harbors and meadows, churches and town squares through his eyes.

I recall the craggy monasteries and worldly monks of sacred Mount Athos, and the sensual abandon of the long, embracing beach at Lindos, on Rhodes, where I communed for a week with a ragtag band of European pilgrims who were all seeking some sort of Aegean answer.

Aegean answers: Hungrily, hesitantly, I would unfold for Gisela my despairs and my dreams, but mostly I would talk about Greece: about the clarity of the rock and the light and how it was teaching me to attend to the present; about the earthy kindness I had encountered everywhere; about the sheer age of the sites and the accumulation of wisdom and sadness and celebration that seemed to hang, poignant, in the Attic air.

Summer came and I left—for Africa and then graduate school, a long, winding road. I never wrote to her, never heard from her.

Now, half of my life later, I wonder: Do we craft our memories, or do our memories craft us?

Now, half of my life later, I know: I went to Greece seeking the roots of Western civilization, and returned with a rootlessness I have never lost.

And every spring the owner shuffles toward us, bearing a laden tray. The sea shimmers. The pines cense and sigh.

Reprinted with permission from The Way of Wanderlust: The Best Travel Writing of Don George. Copyright 2015 by Don George. Published by Travelers’ Tales, an imprint of Solas House, Inc.