The cook draws on her diverse family history for her colourful cookbook Mezcla and explains why, although she writes and tests recipes, she hates cooking from them (and why you don’t have to either). She taps into authenticity, too. “Inspiration comes from all over, but I think we have to acknowledge the bloody history of appropriation, and whatever you do has to be done with consideration and respect.” 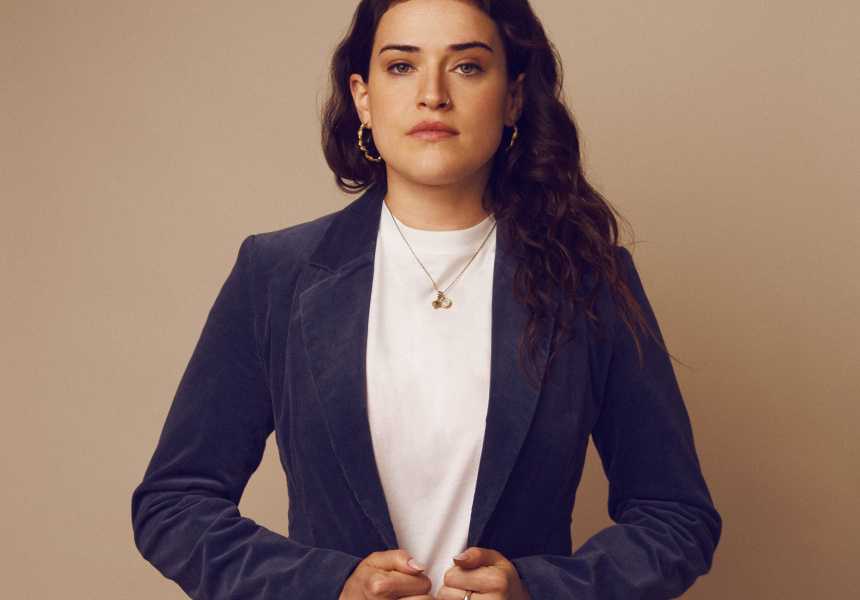 For Ixta Belfrage, the idea of home is complicated. The cook – who co-wrote influential cookbook Flavour with world-renowned UK-based chef, author and restaurateur Yotam Ottolenghi – has a family history that spans continents.

“I was born in London, my mum is Brazilian and I grew up in Cuba. My dad’s parents were English and they lived in Mexico – his dad was deported from McCarthy-era America for suspected communism. I don’t really have a concrete notion of where home is,” she tells Broadsheet. “More than anywhere else, though, home is Italy, where I spent my formative childhood years.”

Belfrage was four when she and her family moved to the servants’ quarters of a 15th century villa in Tuscany. Her dad was in the wine business, and Belfrage spent her days with Giuditta, a school friend, whose uncle was chef-owner of a local restaurant. “My best memories of home are there. My friend’s grandad used to make pasta for the restaurant in the laundry room of their house. I’ll forever associate the smell of clean laundry with fresh pasta.”

In the introduction to her first solo cookbook, Mezcla – just out – she describes those early years eating chicken-liver crostini, tagliatelle with duck ragu, and rabbit fritto misto, which helped refine her palate. A love of food, first nurtured in homely kitchens in the picturesque Tuscan countryside, culminated in a job at Ottolenghi’s London restaurant, Nopi. From there she moved to Ottolenghi Test Kitchen, which is where the famous chef and prolific writer develops the recipes for his books alongside a team of talented cooks.

Belfrage is speaking over Zoom from the compact London flat where she wrote and tested the recipes for Mezcla hundreds of times. It’s a cool summer morning in London, and she’s days away from launching the book. Doing a solo cookbook project and working alone from home is unlike anything she’d ever done before.

“We always had a lot of freedom to come up with our own recipes in the Test Kitchen, and there were always lots of people to taste the things we were cooking. With Mezcla it was just me in my little flat by myself in the kitchen. It was a huge shock, tasting things by myself all day. I questioned whether things were good enough. I really missed having the feedback from other cooks,” she says.

“Good enough” shouldn’t be something Belfrage needs to worry about – her dishes are exciting and deeply flavoursome. There’s a comfortable fluidity to her cooking as she transitions smoothly between ingredients and flavours – such as starchy plantains (a favourite of her mum’s), which she uses in upside-down omelettes with Scotch bonnet salsa; hake poached in a tomato-turmeric sambal and served with udon noodles; or kohlrabi cooked in a meunière sauce with white miso paste, one of the many Mezcla dishes that follows the Ottolenghi practice of championing the vegetable as a main, not a side dish.

Mezcla means “mix” or “mixture” in Spanish, and it suits Belfrage – a woman of mixed origins and many homes, and a maker of recipes that draw from many cultures. She treats the notion of fusion in her cooking with reverence.

“I think the world would be a boring place if we were only allowed to be inspired by our own cultures. In my cooking, I have the influences of the food we ate at home, and what I experienced when I travelled. The ingredients overlapped in my subconscious. It’s been with me all my life, being able to pick up different ingredients from different cultures. I grew up eating that way. That shifted with Ottolenghi as well because I worked with so many different people. Inspiration comes from all over, but I think we have to acknowledge the bloody history of appropriation, and whatever you do has to be done with consideration and respect.”

Belfrage says her recipes aren’t about authenticity but about reinterpreting ingredients for different contexts. She stresses that she’s not an expert, or even a chef. She proudly calls herself a cook. Regardless of her title, it’s clear she learned from the best. Her recipes are meticulous – amounts are measured on scales rather than by tablespoons and cups, chopping and smashing techniques are carefully explained, and even the number of pepper-mill twists is specified: 50 twists for the rich but quick porcini ragu; five twists for the tangy yoghurt with crispy herbs.

“I’ve been classically trained in recipe writing. Ottolenghi recipes are extremely precise, everything measured carefully, and that’s how I write recipes now,” she says. But that’s not how she cooks. “I hate cooking from recipes,” she admits. “It used to bother me when people would tell me they didn’t follow the recipe; I thought, what’s the point of me testing it multiple times? But then I realised I don’t think anyone should cook that way. It depends on your confidence level.”

If someone wants to explore ingredients and techniques, Belfrage says to use her recipes as a jumping-off point. If someone isn’t a confident cook, they can follow the recipe to the letter until they’re comfortable, and later go back and change things. “A recipe book can be different things to different people.”

Mezcla exudes joy – from its eye-popping pink and tangerine cover, to recipes that run the gamut from simple everyday salads, to dishes for entertaining and show-stopping desserts. Her book has received lots of attention, and she’s done a stack of interviews. Still, Belfrage remains humble.

“I thank my lucky stars I got to work for Ottolenghi. I’m so grateful to him. He’s wise, funny, and a bit of a gentle giant. It’s hard to find that in this industry. He’s open about the fact he has a test kitchen and recipe developers, and he says he’s proud of his team. He’s modest, talented and kind, and he brings people up around him,” she says.

Although Belfrage has left the safety of the Test Kitchen, she’s feeling settled and happy with her new circumstances. “I’m happy being my own boss. I get to do whatever I want. I don’t think I could work for anyone else – I could never have as good a boss as Yotam.”

Mezcla, by Ixta Belfrage, is out now via Penguin Random House and is $55. Buy it here.