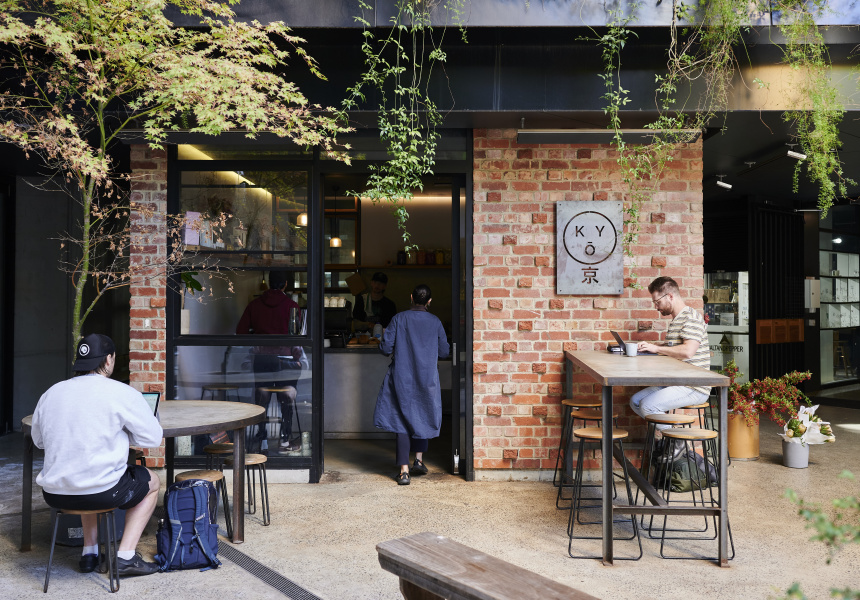 Kyo is defined as much by its lush, open-air courtyard as any of the stellar, Japanese-inflected dishes coming out of the kitchen. It’s a unique spot for sure, alongside a jewellery studio and numerous clothing boutiques at the base of an apartment building on Lonsdale Street.

From the cafe’s name to its commitment to quality and consistency, Kyo is heavily inspired by Japanese culture. But the menu has broader Asian influences, in the form of heart-warming congee, a satay-chicken roti dish or a kimchi-starring toastie. The house signature is something closer to home: a bacon-and-egg roll loaded with kewpie, tomato-chilli jam, dill and coriander on a soft ciabatta. You can’t go past it on first visit.

Considering Kyo began as a coffee roaster, it’s no surprise the coffee here is meticulous. These days beans are supplied by Sydney’s Single O, and there are turmeric lattes topped with pepper, and house-made plum shrub sodas for those chasing an alternative.

Take a seat at the bench with bifold windows looking into the kitchen, or under the Japanese maple tree flourishing in the middle of the courtyard table. Combined with the ivy cascading from the surrounding balconies, Kyo’s dining space is unlike any other in Canberra.