Seeing mountain gorillas in the wild is often raved about as a true bucket-list adventure. In partnership with G Adventures, we set out for Africa to find out why first-hand. 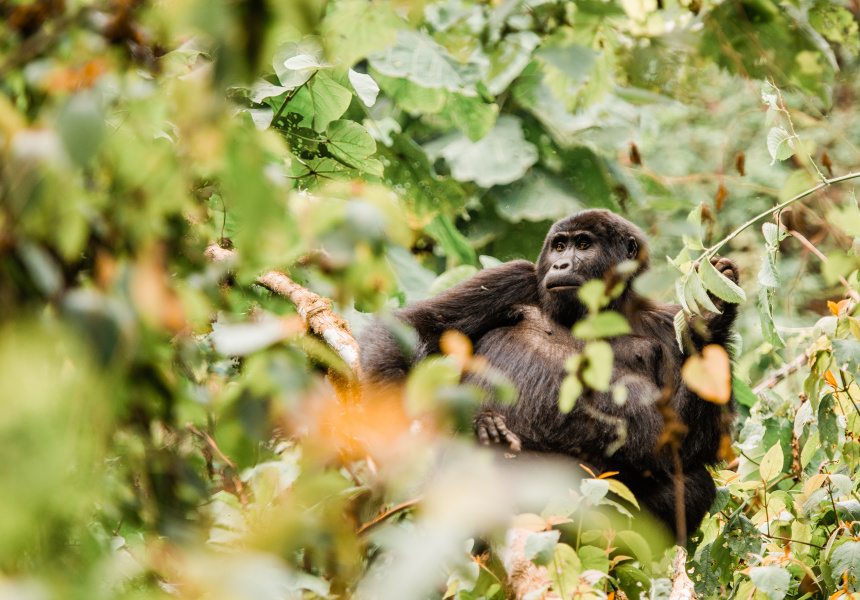 No one could argue our small G Adventures tour group has been starved of wildlife. So far on my cultural and wildlife tour of Uganda and Rwanda we’ve trekked through Kibale National Park to see chimpanzees swinging from the trees. We’ve popped the roof of our van and stood on the seats spellbound in Queen Elizabeth National Park as a herd of savannah elephants crossed our path on safari. We’ve cruised the Kazinga Channel that links Lake Edward and Lake George and watched Nile crocodiles mingle with hippos and buffalos. We’ve seen more bird life than you’d find in a David Attenborough documentary: flamingos, African jacanas, spoonbills, yellow-billed storks, weavers, cormorants and kingfishers. But it’s really all been building to this moment. Today is the big one: gorilla day.

It’s been a long drive climbing the twisting mountain roads to reach the formidably named Bwindi Impenetrable National Park in the south-western corner of Uganda. This Unesco world heritage site in the sub-tropical rainforest is one of only two places in the world where you can find the endangered mountain gorillas. The other is in the nearby Virunga Mountains, just under four hours south in northern Rwanda.

You will not find these creatures in zoos. For reasons no one really knows, these incredible animals, whose genes are 98 per cent identical to ours, don’t survive in captivity. So it’s vital for the survival of the species that the wild population is protected and given every opportunity to thrive.

From a low of 242 in 1981, mountain gorillas numbers are currently just over 1000, and steadily increasing, thanks largely to the conservation funds raised from treks such as the one we’re doing today.

Much of what we know about mountain gorillas comes from the work of Dian Fossey, the primatologist and conservationist who spent 18 years here studying life among the mountain gorillas of Rwanda. Famously portrayed by Sigourney Weaver in the 1988 film Gorillas in the Mist, Fossey was murdered in her cabin in the Virunga Mountains in 1985, allegedly at the hands of poachers. But her legacy lives on in the region’s renewed conservation efforts – something mirrored by the work of great chimpanzee conservationist Jane Goodall. This tour is one of 20 wildlife-focused tours worldwide that make up the G Adventures’ Jane Goodall Collection, a series of adventures that create awareness about, and support for, their mission to protect wildlife and empower local communities.

Our guide, Patrick, from the Uganda Wildlife Authority, tells us that today we’ll be tracking the Kahungye family, named after the hills where our trek begins. Mountain gorillas are social animals, living in stable family groups with long-term bonds. Habituation of the 19 gorilla families found in Bwindi started in 1993, two years after the national park was gazetted.

The track leads us down a ridgeline and we pass a line of fallen cyprus trees and beehives that demarcate agricultural land from the national park. The bees are there to stop the elephants leaving the national park and wandering into the village. As we walk along the thick jungle track, comically large elephant prints are visible in the mud; they give a Jurassic Park feel to our expedition.

As we penetrate farther in to the impenetrable forest, word comes from the scouting party of trackers up ahead they’ve located our gorilla family, about an hour’s hike away. The idle chatter ceases and we bristle with anticipation. Soon after, it happens. We reach a small clearing surrounding by dense bush and see our first gorilla, sitting in the crook of a tree munching lazily on leaves. We freeze in awe. We clearly don’t have the same impact on the gorilla, which regards us with a casual nonchalance and continues plucking branches.

It’s said the reason we feel such a connection to gorillas is because they’re so much like us. Watching the way this carefree juvenile sits idly on a branch reaching for leaves and mindlessly delivering them to his mouth for some reason reminds me of watching someone slowly work their way through a packet of chips while waiting for a mate to arrive at the pub. Then, slapstick: the branch the gorilla is perching on gives way and the hapless creature crashes to the ground. He continues snacking without disruption or embarrassment, his fur now coated with the fine debris of fig tree.

The tomfoolery of this junior is a great support act. But it’s nothing compared to the headliner. I doubt there are words yet coined that can adequately describe the exhilaration that grips you as a 150-kilogram silverback gorilla bursts out of the undergrowth in front of you and turns to meet your eye.

It’s the face you’ve seen countless times in photos and documentaries. Except this time it’s real. For a split second I think he’s going to turn and charge at me. But he must realise it wouldn’t be a fair fight, so instead lunges for the cover of trees, slipping through the thick undergrowth with unexpected stealth for a creature of such massive bulk. I breathe out slowly and tell myself, “I must remember this moment.”

We soon find the silverback again and spend half an hour captivated. Everyone in the group seems to comprehend the rarity of the occasion – you don’t just walk into a rain forest and hang out with mountain gorillas in the wild, on their terms. There are no cages, no fences, no solid line between us and them. That very concept – “us and them” – is rendered almost meaningless in this natural environment. I think that’s the point.

My favourite gorilla we encounter is one the group dubs “The Thinker”. I stand just metres from her as she lazes in a thicket, completely unperturbed by my presence. Periodically she pauses to look skyward wistfully, as if lost in deep contemplation, her thoughtful, serene face almost oracle-like. I wonder what her prescriptions for us strange humans would be if she could speak.

For many people the chance to spend time up close with mountains gorillas is the ultimate wildlife bucket-list experience. I now understand why. Few interactions with wild animals can deliver such an intense emotional connection. We recognise ourselves in them.

It’s clear too what an impact these animals have had on our guide, Patrick. He’s visited this family dozens of times but tells us the thrill never diminishes. “They are so much like us,” he says. “It is very emotional to watch. The way the mother holds her baby is so passionate. If a baby dies the mother will keep carrying around the dead body. I’ve even seen a silverback carry a baby; it made me cry.”

As we walk out of the national park, the lush forested mountains give way to crop plantations. The buzz of cicadas is replaced by the drone of a chainsaw. At this point we’re straddling two worlds, but in only one of them can the mountain gorillas survive. It’s been a true once-in-a-lifetime privilege to briefly leave ours and spent some time in theirs.

This article is produced by Broadsheet in partnership with G Adventures.