Peru by Foot: Taking the Lares Trek to Machu Picchu

The three-day hike of the Lares Trek is a road less travelled by tourists. In partnership with G Adventures, we undertake the 36-kilometre walk and experience all its glories. 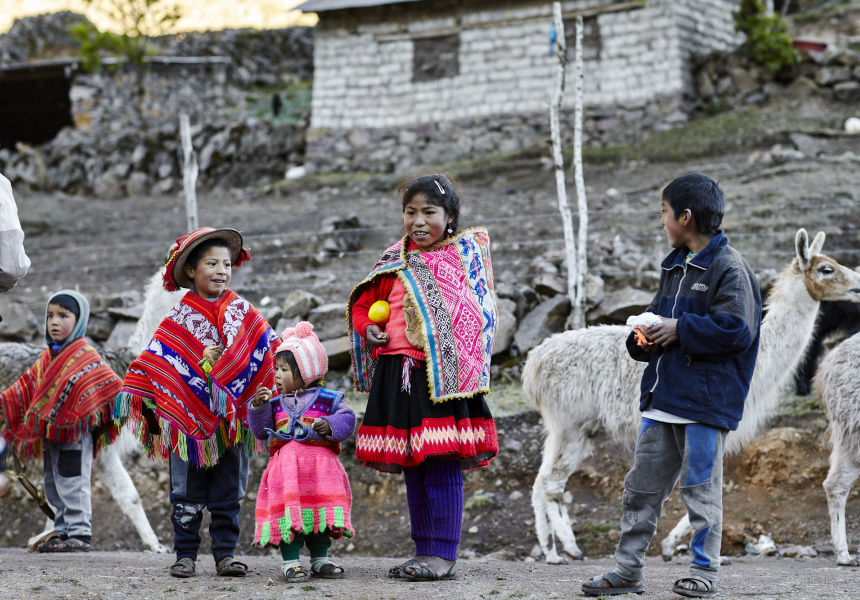 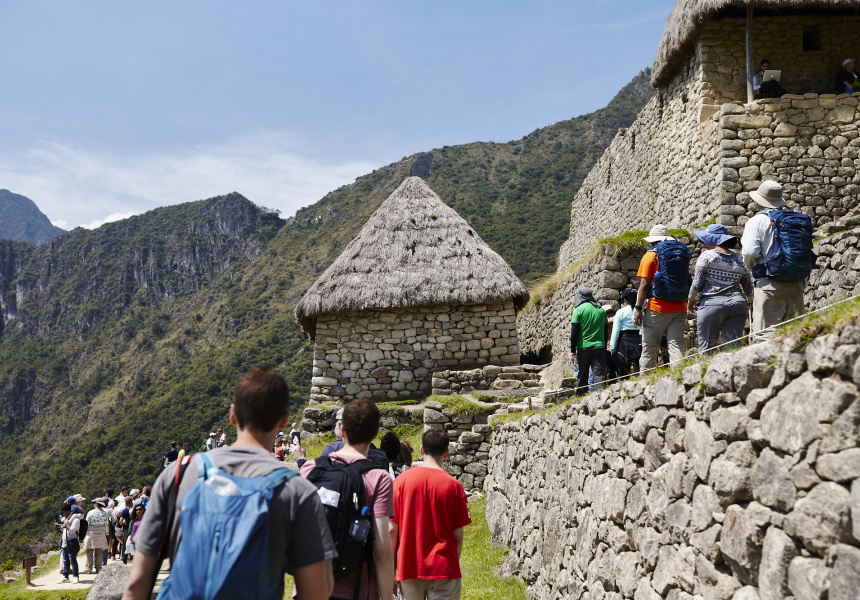 We’re roughly 4200 metres above sea level, high in the Andes of Peru. The air is thin and only moss and button grass grows among the rocks. And yet people – the resilient Quechua peoples – live here.

It’s only a few hours into our toughest day of the Lares Trek, a three-day hike in Peru’s undulating Cusco region. We’re clad in tech apparel and serious hiking boots and using poles to sturdy each step. But the local Indigenous peoples traverse this difficult landscape in sandals at an astonishingly fast pace compared to us tourists unaccustomed to the altitude.

The Lares Trek is one of the “other” Inca Trail hikes. It’s a day shorter than the more well-known trails, though higher in elevation. But they’re not comparable. A whopping 500 people per day are permitted to walk the Inca Trail. On the Lares Trek you’ll encounter more llamas than tourists. 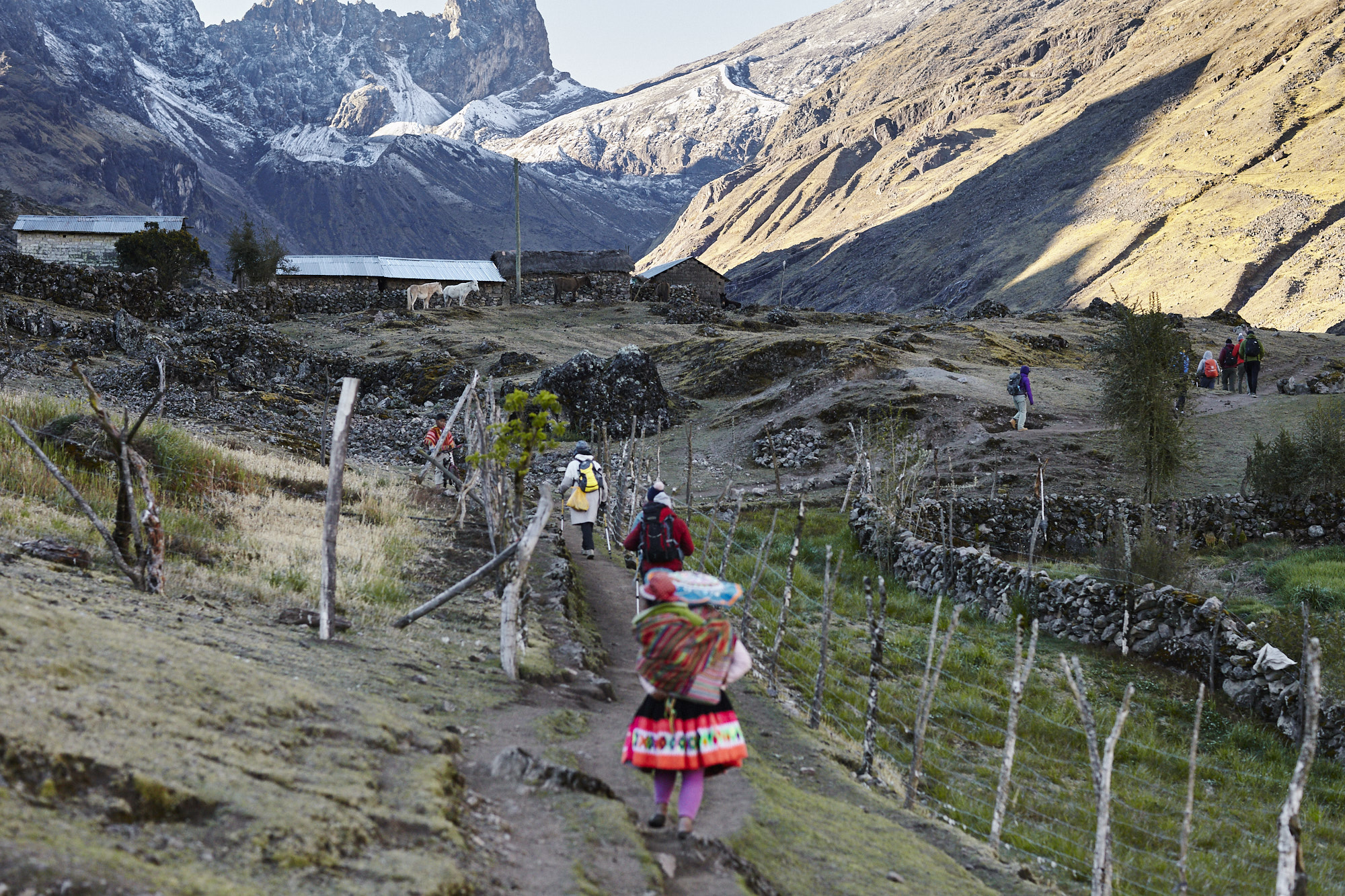 We wake early in Ollantaytambo – a small town with its original Incan walls and grid-like streets and laneways still intact. This history-filled maze of ancient stone architecture is often the starting point for the Lares Trek and Inca Trail. Our group boards a purple G Adventures bus for the town of Calca to visit its bustling mercado (market). Exchanges of buenos días, ¿cuánto cuesta? and muchos gracias flow between foreigners and generous, friendly locals as we buy jungle fruits. Our mid-morning snack is a handful of steaming-hot tamales wrapped in corn husks. Then we race back to the bus to make the steep winding drive up and over Abra de Lares (4461 metres above sea level) to reach the town of Lares, the starting point of our hike.

The first day is a simple and gradual ascent. Without the strains of altitude (if affected) it would be a stroll in the park. We’re enjoying the 30-degree warmth of the day and chatting in broken Spanish to the rapid-speaking locals padding their daily route. As we pass a small escuela (school), the bell rings and two young boys race from the front door. They clearly look forward to these strangely clad folk puffing up the slopes a few times each month. Donning sandals and Barbie backpacks, the kids are patient with our poor Spanish as we ask their names (¿como se llama?) and introduce ourselves. Some join us for a short part of the walk before accelerating up the hills and home for lunch – then back to us again before we even pass their homes.

The heavy clouds gathered over the trail release a downpour just as we reach a mud-brick hut for lunch. We put on an extra fleece and cradle steaming cups of coca tea to ward off the cold change. Out come the plastic ponchos we’d bought in Ollantaytambo the night before and we wave goodbye to the family that hosted us for lunch. Step by step we move forward contending with elevation headaches and dampened spirits brought on by the drizzle.

A fog rolls in as the daylight dims, creating a misty cloak over the green hillsides. We pass sheep, lambs, llamas, alpacas and dogs before arriving at the G Adventures-supported, community-run campsite at Cuncani just as twilight fades. We splash our faces with warm water before sipping tea and crunching on sweet biscuits and popcorn before dinner. This is “happy hour” at 3800 metres elevation.

After dinner, our guide Victor makes a joke that we can simply use the el bano outside our tents in the middle of the night if we’re worried about meeting a bear or puma en route to the toilet block. We all laugh. Only the following day do we discover he wasn’t joking. 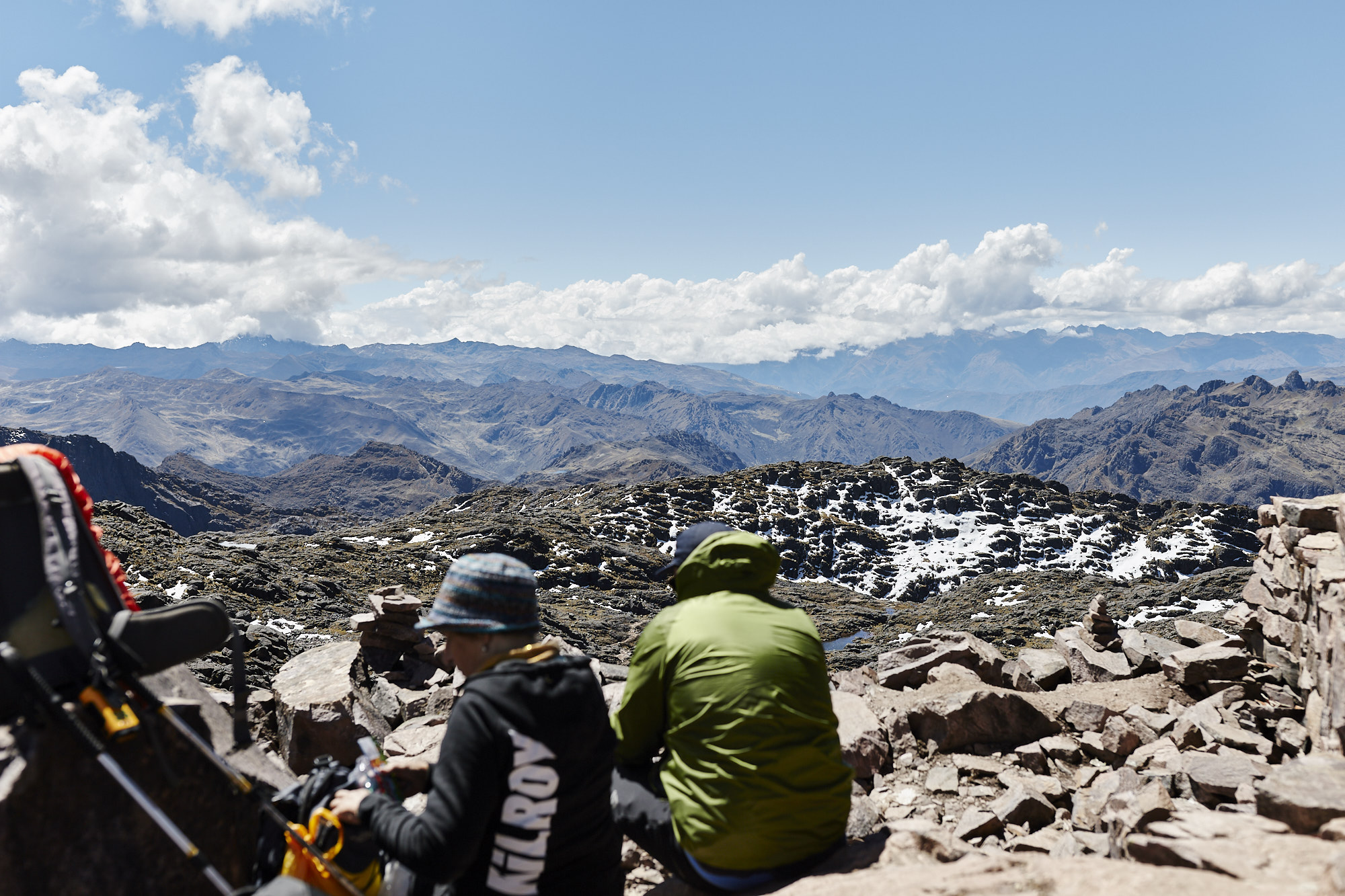 “Good morning, would you like some coca tea?’” Bright-eyed assistant guide Jean-Pierre wakes me at 5am from a cold-restricted slumber. He hands me tea and I try not to spill any in my tent before snuggling back into my sleeping bag. A few moments later I roll a little too furiously into a seated position and indeed spill my tea.

The cooks have made us crepes for breakfast with our names written on top in swirls of caramel – a solid dose of glucose to kickstart our day. Today will be the most challenging leg of our trek, climbing 1000 metres up and roughly 600 metres down – mostly all before lunch. Backpacks on and poles in wool-gloved hands, we quickly rise out of the cold dark valley. The sun greets us at our first rest stop, bathing us in glorious, soft, early-morning light.

A team of horsemen accompanies us on our hike, setting up and packing down our camp as we go. This morning they guide the horses, mules and llamas past us up the slopes. Head horseman Eduardo and his steed Sandro position themselves at the back of the group to ensure we’re on the right track. We pass turquoise lakes filled with trout and encircled by snow. The weather is perfect today – no rain or snowfall and bright-blue sky overhead. We’re tremendously lucky.

We pass switchbacks of grass, gravel, dirt, and rocks big and small. We carefully walk over moss and small streams, climbing onwards to Sicllakasa Pass. We pause to marvel at our surrounds and the fact we’re actually here to witness these remarkable views with our own eyes. The silence feels immense in the open landscape.

As we ascend the final 200 metres towards the peak, it occasionally feels we’ve collided with a thick, invisible barrier that doubles us over with shortness of breath. The tale of the tortoise and the hare comes to mind on several occasions – we keep putting one foot in front of the other, no matter how slow our pace. We make it up the final few boulders where Victor greets us with a hug. It’s roughly 4800 metres at the top. A totem of Jesus’s head wearing traditional Quechua garb salutes our efforts and we each add a rock to the stone cairns, called apacheta in Quechua, left by other travellers.

The other side of the summit presents new challenges – it’s blanketed with deep snow. Our trusty team of horsemen has stamped us a safe path, but the compacted snow over gravel is slippery, like ice, and we adjust our poles to support our descent. One hiker tries to traverse the soft powder instead of the path and ends up thigh-deep in snow.

After we’ve conquered the white ice – I only slipped once – a jaw-dropping, verdant valley awaits below. Through a gap in jagged ranges we descend steep rocky slopes, cross gentle plateaus and hike down through a forest of polylepis (quenia) trees – with vibrant red, brown and black paper-like trunks – to arrive at our lunch spot on a scenic, windy cliff. It’s been almost eight hours of hiking and we have about two hours to go until we reach camp.

Sardined in our lunch tent we clasp comforting tea, feeling all manner of reprieve and relief after the morning’s efforts. Our final descent traverses rocky outcrops and flat grassy river plains to arrive on a mystical valley floor. Mossy mounds and chiseled rocks seem manicured as they envelop our trail and lead us to Toqopampa, our campsite for tonight.

I snack on cancha (roasted corn kernels) and take stock of the day as the last rays of sunlight slip over the surrounding peaks. The mules and horses roll around on the grassy floor after their packs are removed – they’ve had a big day too. After dinner we stand outside in the utter cold, headlamps switched off to see the constellations overhead. The moon is yet to climb high enough to reach us in this dark valley, though midnight “panoramic bathroom” runs will be well lit by its brilliant light a few hours from now. 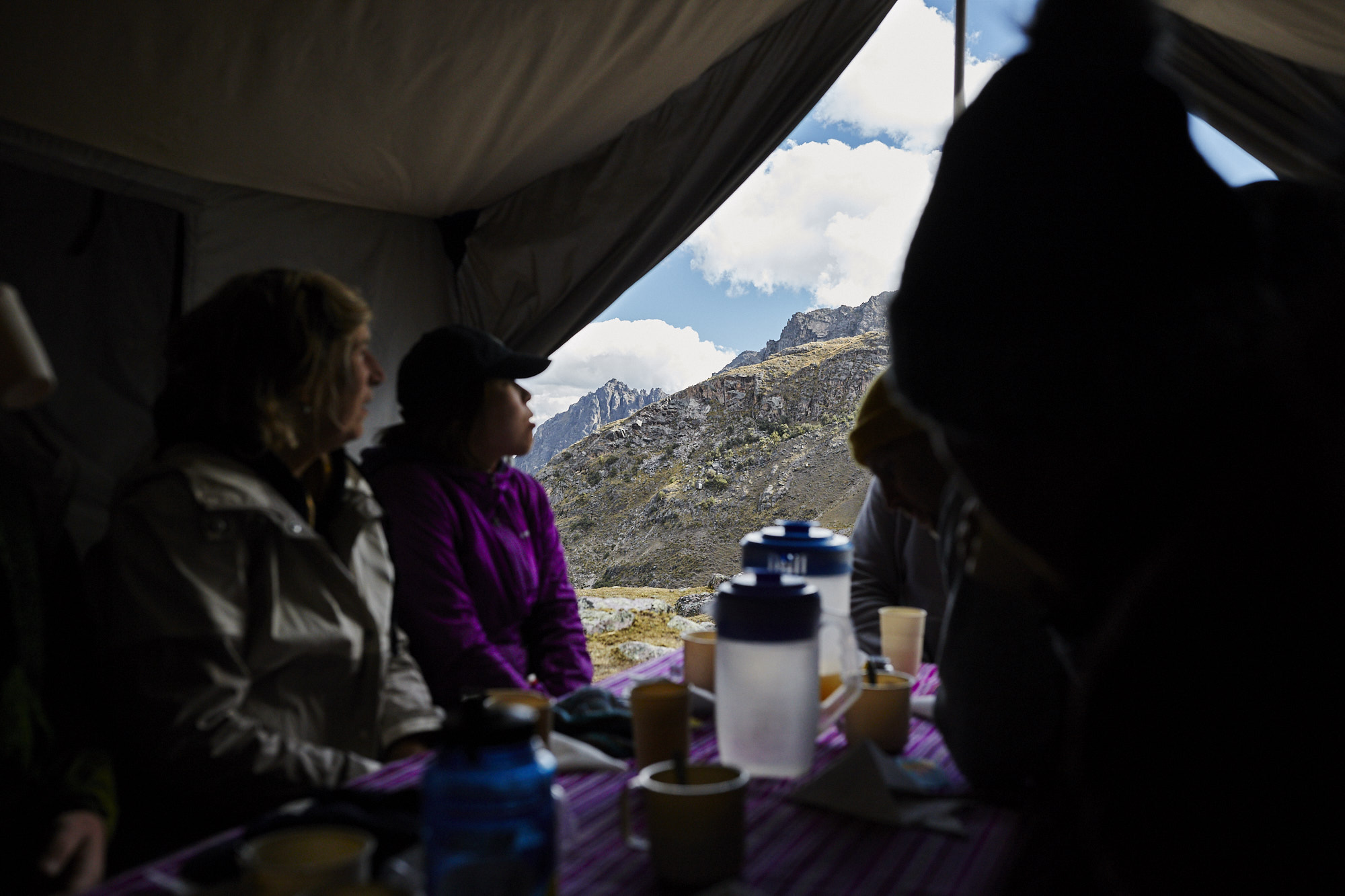 We wake to ice forming a crusty coating on our tents. Despite wearing long johns, double socks, a fleece, beanie and, of course, a warm sleeping bag, the night was cold. This time I manage not to spill my coca tea.

The chefs have already made us a tiered cake for breakfast. It gears us up for our final leg. The last 3.5 hours of hiking is beautiful but requires concentration as we ramble down large boulders, loose rocks and across gushing streams. We wave goodbye to the snow-capped peaks and continue past waterfalls and llamas grazing in the thickening vegetation to admire the traditional Quechua architecture.

We pause at Inca Raqay – ancient ruins believed to have once been a bustling marketplace, now a resting place for travellers. Only now do we start to come across occasional other travellers commencing their ascent in the opposite direction. Before we’ve reached the finishing line, one of our crew hastily passes us returning in the opposite direction with all the horses – he’s heading back to our first campsite at Cuncani, which he’ll reach by 8pm; achieving in an afternoon the same route that took us 1.5 days.

As we reach the end of the trek, pink peppercorn trees (native to the Peruvian Andes), bougainvilleas, roses, echinacea flowers, wild raspberries and fennel fronds begin to line the trail. We take a bus to our lunch spot just a short drive away, passing houses and small farms growing beans and brassicas. We remove our weary feet from our boots and sink a Cusqueña beer in celebration before feasting on eggplant, yuca, potatoes, curry, rice and quinoa for our final meal together. We say muchos gracias and adiós to our chefs and horsemen who have looked after us so well.

Hopping off the bus back in Ollantaytambo we wander through the backstreets and the marketplace, pausing for ceviche and Pisco Sours on a balcony overlooking Plaza de Armas. Come nightfall, we’ll travel by train to Aguas Calientes and will arrive around 9pm. The group is almost silent with weariness after our 36-kilometre trek. A hot shower and a good night’s sleep beckons, before another early rise to take a bus up through the jungle-clad mountains to reach Machu Picchu, where we will hike in the humid heat to summit the Sun Gate.

This article is produced with Broadsheet in partnership with G Adventures.